Kerala: The Legacy of Visual Culture

Even much before the arrival of cinema, the people of Kerala were familiar with moving images on the screen through the traditional art form 'tholpavakkuthu' (Puppet Dance). Usually exhibited at festivals of village temples, 'tholpavakkuthu' uses puppets made of leather with flexible joints. These joints are moved using sticks and the shadow of these moving puppets are captured on a screen using a light source from behind, creating dramatic moving images on the screen. Stories from the mythology were told so, with accompanying dialogues and songs with traditional percussions like the Chenda. 'Tholpavakkuthu' uses some of the techniques widely used in cinema like the close-ups and long-shots.

Apart from the art of 'tholpavakkuthu', which exhibits the nature of cinema, many of the folk arts and classical dance forms like 'Kuthu', 'Koodiyattam' and 'Kathakali' exhibits very high visual qualities in their form. My be this legacy of Kerala's visual culture lead the filmmakers of Kerala to take up cinema in a different way, rather than mere plain storytelling, than anywhere else in India, and the people of Kerala to appreciate them.

The first Malayalam cinema was produced and directed by, J C Daniel, a dentist by profession who didn't have any prior experience with the cinema. His film Vigathakumaran was released in 1928 but failed economically. But it is notable that while mythological films ruled all over the Indian cinema arena, J C Daniel had the courage to produce the first ever Malayalam film with a social theme. The economic failure of Vigathakumaran discouraged him from producing further films.

The ill luck of Malayalam cinema continued. The second film Marthandavarma based on a novel of the same name by C V Raman Pillai was produced by Sunderraj in 1933. But due to a legal confrontation regarding the rights of the film, the producer had to withdraw the film from cinema halls after a few exhibitions. Had it not been for the legal embargo, the film would have had a great impact on the cinema of South India. By Marthandavarma the history of silent Malayalam cinema too came to an end.

Indian cinema had already entered the talkie age even before Marthandavarma was released. Balan, the first Malayalam cinema with a sound track was released in 1938. Produced by Tamilian, T R Sundaram at the Modern Theatres, Balan was directed by Notani. A melodramatic film, with more Tamil influence than Malayalam, Balan featured the struggle of two orphaned children, Balan, and his younger sister, oppressed and exploited by their evil stepmother until they are rescued by a kindly lawyer. Even though this film could be considered irrelevant in an artistic sense, its economic success created a base to the Malayalam film industry. Followed by the success of Balan, Jnambika was released in 1940. After Prahlada (1941), Kerala had to wait until 1948 for the next film. Nirmala (1948) directed by P J Cheriyan explored the possibility of music and songs in Malayalam cinema. Legendary Malayalam poet, G Shankara Kurup penned the lyrics for this film. Thus song-dance sequences became an essential ingredient for commercial success in Malayalam cinema.

Inspired from an imported film - Life of Christ - Phalke started mentally visualizing the images of Indian gods and goddesses. What really obsessed him was the desire to see Indian images on the screen in a purely Swadeshi venture. He fixed up a studio in Dadar Main Road, wrote the scenario, erected the set and started shooting for his first venture Raja Harishchandra in 1912. The first full-length story film of Phalke was completed in 1912 and released at the Coronation cinema on April 21, 1913, for special invitees and members of the Press. The film was widely acclaimed by one and all and proved to be a great success.

It is notable that none of the Malayalam films that came before the independence of India reflected the mood of the struggle for independence and also the film that came after independence and the early 1950s reflected that torrid period of Kerala, where the Communist upspring was taking place changing the entire social climate of the State. Cinema continued to be dramas happening in a totally artificial and alien world.

(The boat of life) 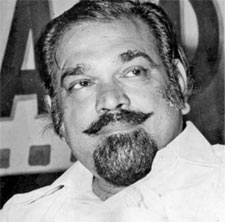 Acclaimed as an innovator of Malayalam cinema of the 1950s to the 1970s, Ramu Karyat (1927-79), is one of the protagonists of Kerala  People's Art Club in the domain of the communist IPTA. After Neelakuyil in 1954, he shot Minnaminungu (The Firefly) in 1957, a path-breaking film of Malayalam cinema. Thoppil Bhasi's famous play Mudiyanaya Puthran(The Prodigal Son) was filmed by Ramu Karyat in 1961. This film featured Satyan, a specialist in 'macho' roles, which is a convincing melodrama about the irresponsibility of a self-centered young man who deliberately sinks into anti-social behavior before being reconciled with life by the love of a young 'untouchable' girl and by the warmth of a group of workers. After Moodupadam (1963), a social film about the relationship between three major religious faiths of the State, Hindu, Christian, and Muslims, Ramu Karyat made Chemmeen a definite turning point in Malayalam cinema.