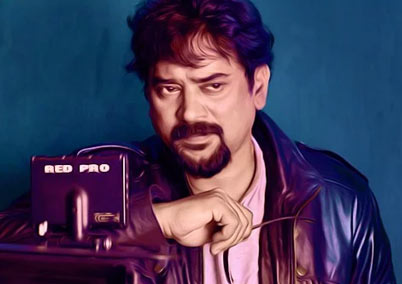 Most critics and audiences consider the period from (the late 1980s to early 1990s) as the golden age of Malayalam cinema. The Malayalam cinema of this short but beautiful period is a culmination of the Malayali ethos and south Indian life. It is characterised by detailed screenplays, excellently directed by master-directors, dealing with everyday life with a lucid narration of plot intermingling with humor and melancholy. This was aided by brilliant cinematography and lighting as in motion pictures like Perumthachan (1990), directed by Ajayan with Santosh Sivan as the cinematographer. While the movies were made expressive with warm background music by composers like Johnson, as in the motion picture Nammukku Paarkkaan Munthiri Thoppukal (1986) directed by Padmarajan.

Many of the movies released during this time narrowed the gap between art cinemas and commercial cinemas in the Malayalam film industry, as in Oru Vadakkan Veeragatha (1989). These were paralleled with movies like Kireedam (1989) directed by Sibi Malayil and written by Lohitadas, Mathilukal directed by Adoor Gopalakrishnan (1989), 'Amaram'(1991) directed by Bharathan and 'Sargam'(1992) directed by Hariharan.

The period had an abundance of movies rich in creative humor from directors like Priyadarshan, Akkare Akkare Akkare (1990) and Sathyan Anthicad, Nadodikkattu (1987). The era also saw well-crafted comedy by the Duo Siddique-Lal, (Ramji Rao speaking (1989)) and In Harihar Nagar (1990). Other notable contributions of this period include His Highness Abdullah (1990) directed by Sibi Malayil, Piravi (1989) by Shaji N. Karun, Abhayam (1991) directed by Sivan, and the motion picture Daisy (1988) an expression

Malayalam cinema in the first half of the 1990s

Later movies followed in the essence of the golden period but lacked in freshness. However, they still stand out for their brilliance in storytelling and appeal. These include 'Bharatham' (1991) by Sibi Malayil, Kaalapaani (1996) by Priyadarshan, and the award-winning 'Manichitrathazhu' (1993) by Fazil. 'Sphadikam' (1995) directed by Bhadran was well received by the viewers as was 'Desadanam' (1997) by Jayaraaj. Some works stood out as strong in evocative power reminiscent of the earlier period, like Swaham (1994) directed by Shaji N.Karun the first Malayalam film entry to the Competition in Cannes International Film Festival in 1994. 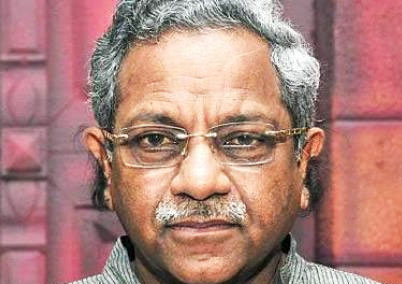 After the early 1990s, the quality of Malayalam cinema declined. Partly due to the arrival of satellite digital television and film piracy and partly due to the changing interests of the audience. The movies in the current period are largely nonsensical comedies primarily aiming at large scale entertainment without much artistic message. These movies include Meesamadhavan (2002) by Lal Jose and Kunjikkoonan directed by Sasi Shankar (2002). However notable exceptions to these were the motion pictures Chinthavishtayaya Shyamala by Srinivasan (1998) and Vanaprastham (1999) directed by Shaji N Karun. Also Narasimham the highest-grossing Malayalam movie as of 2005 was released during this period, in 2000.

Here comes the place for Jayaraj who acts a double role in Direction as, at the same time when he receives national awards by running in the tracks of Art films, he makes sincere try to set new trends in Malayalam cinema by directing films like “...For the people”.

This is the period where two sequels of previously notable movies came out Mohanlal's Ravanaprabhu the second part of Devasuram and Mammotty's Sethuramayyar CBI the third part of Oru CBI Dairykurippu. Udayananu Tharam, a blockbuster, and a trend-setter were jointly released by the Mohanlal and Sreenivasan.

This period witnessed the migration of Malayalam film technicians to participate in other language films. Among them were Priyadarshan, Santosh Sivan, Sabu Cyril, Ravi K. Chandran, Sreekar Prasad, and others 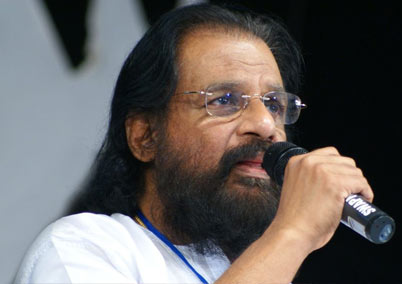 Even though A.M. Raja, P. Susheela, and Janaki hailed from Andhra Pradesh, Malayalis had no hesitation in accepting them as Kerala's own singers. Later on many such singers from outside Kerala, like Manna Dey, Talat Mehmood, Lata Mangeshkar, Asha Bhonsle, and S.P. Balasubramanian lent their voice to Malayalam films. Even music directors like Naushad, Usha Khanna, Ravi Bombay and Ilaya Raja from other states composed music for Malayalam films.

The uncrowned king of Malayalam playback singers, Yesudas, continues to be the most popular singer of Kerala even at the age of 58 and has, in fact, become a living legend.

Now with the new hip-shaking music, Jassie Gift is a passion among the young blood. 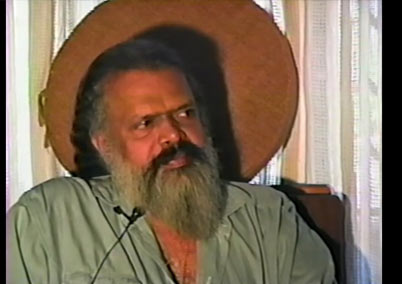 Adoor Gopalakrishnan who appeared on the scene with Chitralekha Film Society directed the film "Swayam Varam' in 1972. Later, he made 'Kodiyettam', 'Elipathayam', 'Mukha Mukham', 'Mathilukal', 'Vidheyan', and 'Katha Purushan', which won national and international acclaim.

M.T. Vasudevan Nair's directorial venture 'Nirmalyam' won National honours. Most of the films scripted by him were masterpieces, like 'Vaishali', 'Oru Vadakkan Veeragatha', 'Perumthachan', and 'Parinayam'.
IV Sasi entered the film industry by directing a small budget film with Ummer as the lead, Ulsavam (1975), which became a commercial success. He continued this success in most of his later films, Angadi (1980), Ee Nadu, Meen, Trishna (1981), Mi>Ragam, Anubandham (1985), Vartha and Avanazhi (1986) being some of his notable films.

Fazil is considered as the biggest money-spinning director of present-day Malayalam film industry. He started his career with the film Manjil Virinja Pookal, which introduced Mohan Lal who later became a superstar of Malayalam cinema. Ente Mamatikuttiammakku, Nokatha Doorathu Kannum Nattu, Pappayude Swantham Appus, Aniathipravu, and Harikrishnans are some of his commercially successful films. 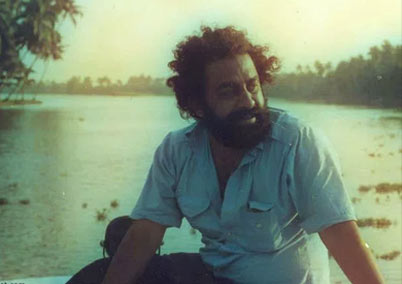 Balachandra Menon, who entered Malayalam cinema in the 70s is miraculously surviving even today and has even won a National Film award for best actor. Menon makes his films almost single-handedly, looking after direction, editing, writing, music direction and so on. Tharatu, Kelkatha Shabdam, Karyam Nisaram, Samantharangal, and Krishna Gopalakrishna are some of his major films.

Srinivasan who entered the cinema industry as an actor later proved his talent in writing screenplays and also direction. The two films he directed, Vadakkunoki Yantram and Chintavistayaya Shyamala could be considered among the best commercial films ever produced in Malayalam. These films had an in-depth study of middle-class family relationships and also human psychology.

Now it is Mr. Blessy doing the trick and his two films yet have given his own identity. His two pictures, Kaazhcha and Thanmatra are big hits. And he is writing a new formula to invite the family to the cinemas. 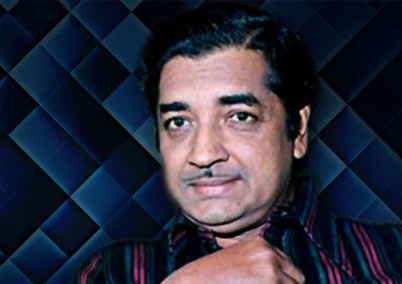 Thikkurisi Sukumaran Nair was a father figure of Malayalam films. He was a scriptwriter, lyricist, director and versatile actor. The heroes who ruled over Malayalam film kingdom were Sathyan and Prem Nazir. Raghavan, Sudheer, Vincent, Sukumaran and M.G. Soman came later. Some of the popular heroes of the present day are Mohan Lal, Mammootty and Suresh Gopi, Jayaram and Mukesh. Among the earlier notable heroines were Padmini, Madhu, Ragini, Sheela, Sarada and Jaya Bharati. Then came Ambika, Menaka, Manisha, Sobhana, Manju Warrier and Divya Unny.

There has been no dearth of brilliant character actors and comedians in Malayalam films. The very concept of a romantic hero was shattered to pieces by the appearance of Gopi as the hero in 'Kodiyettam'.

The State Government has instituted annual film awards, and provided concessions in the form of tax exemption for deserving films, and subsidy and package programmes for films shot in studios. The State-owned Chitranjali Studio has all facilities. A State Film Academy has just been started to help the film industry in the State.

In addition to the Kerala Film Chambers, film artists have an association called 'AMMA' and film technicians have an organization called 'MACTA'. These organizations look after the interests of the film industry in Kerala. There are a number of popular journals in Malayalam. 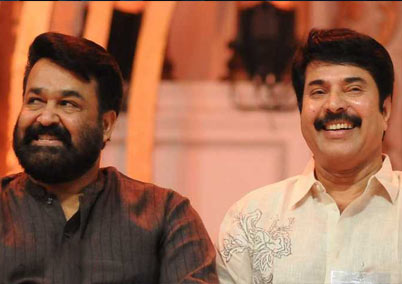 Children's films like 'My Dear Kuttichathan', 'Kummatti' 'Manu Uncle' and 'Kochaniyan' have won national awards. The awards for the Best Director were won by Adoor Gopalakrishnan, Aravindan, Shaji, T.V. Chandran and Jayaraj.

Many persons working in this field are men of eminence. Prem Nazir was a recipient of Padma Bhushan Award and Thikkurissai had received Padma Sree. Padma Sree was also conferred on Adoor Gopalakrishnan, Gopi, O.N.V. Kurup, and Mammootty. M.T. Vasudevan Nair is a Gyan Pith Award winner. Even though Cable TV has made strong inroads in Kerala, the number of theatre audience has not shown any significant decline. Malayalam films have come a long way since 1928 by providing wholesome entertainment and meaningful cinema to its viewers.